Most queer folks — maybe even most bi activists — would be hard-pressed to name even one bisexuality-focused mass media outlet, with national editorial and advertising content that caters to out bi readers. Why? Because there is none in print.

Anything That Moves was a popular bi mag published by San Francisco’s Bay Area Bisexual Network from 1990 until 2002, at one point producing a 64-pager with an international reach.

Serving on the editorial board for The Journal of Bisexuality, I’m proud to say that I support the most reliable, viable and intellectually engaging publication for, and by, bi persons. JoB is a peer-reviewed scholastic journal, and though it takes on nonacademic topics, it must conform to academic editorial standards. Few persons except those supported by an academic department or library can afford such subscriptions, which explains why its circulation is under 200.

Another popular, informative, quarterly bi print serial, Bi Women, has been published by Bi Women Boston since 1983, and it is the oldest continuously published bi women’s newsletter anywhere. Its present print run is “about 600, with an additional 2500 electronic subscriptions,” according to editor and activist Robyn Ochs.

Currently, Bi Community News in the UK, published regularly since 1995, is the biggest-selling bisexual magazine in the worldwide bisexual community. 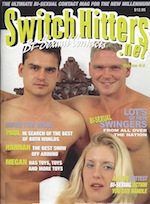 About six years ago I interviewed the editor of a dozen sex mags for acknowledged bisexuals (with much spillover to bi trans persons). These magazines, with titles such as SwitchHitters, She-Male Magic and Swingers Quarterly, featured explicit personals and photos, with display ads for videos, sex services and products, but almost no editorial content. Most had a circulation of less than 500, but the more popular ones had a print run of several thousand.

Yet none of these periodicals has had mass-market appeal or reach. There is nothing like a Details, Attitude or Curve for bi folks. Even trans folks have had the quarterly glossy Transgender Tapestry since 1978.

Since the 2006 inception of the bisexuality category of the Lambda Literary Awards — which, for several years, had enough entries to separate them into nonfiction and fiction categories but has recombined them back into one category this year — books have been the primary literary medium for bi readers. The promotion of bi books along these efforts has done much to further bi visibility, but it is not enough.

Bi activists have made inroads into LGBTQ media, most significantly demonstrated by the presence of a bi woman as editor of the Advocate. But we have yet to see an issue of the Advocate, Out or Gay & Lesbian Review Worldwide that targets bisexuality or bi activism as a theme.

Now that statistical data verify that the number of bisexually identified persons, as well as the count of persons who behave bisexually, has been vastly underestimated, it is clear to bi activists that this population is extremely underrepresented and underserved in national LGBTQ media.

The snail’s-pace development of bi media is far outrun by markets specific to gay men, lesbians and trans folks — by at least a decade. What is inexplicable is the lack of any major national magazine marketed to bi men, who comprise the largest LGBTQIA segment likely to remain closeted. Thus bi guys are the audience that needs the most outreach from GASM (gender and sexual minorities) activists, to share honest understanding and affirmation of bi men’s experience, ultimately to help bi men come out into community.

The conspicuous absence of any major national bi-identified or bi-focused popular monthly continues to limit accessibility to both popular and intellectual writing on bi topics by the mainstream. This lacuna of bi media is broadened by the unwillingness of the gay and lesbian media to take up bi-specific topics, whether from ignorance, inertia, phobia or lack of advertising base.

To increase their presence in gay and lesbian media, bi activists first need to address their underrepresentation in existing national LGBTQ-rights organizations. As these groups better reflect bisexuals’ interests, the media will eventually pay attention. Then bisexual advocates may begin to create adequate representation in the media at large and build for bisexual persons a popular mass medium of their very own.